Oil of Rosemary was relatively well known among painters up until about 100 years ago, when some makers of art supplies still 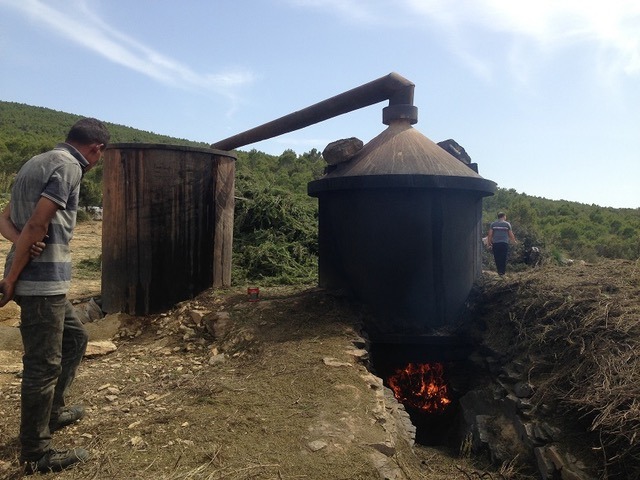 sold it, but its use was gradually eclipsed by turpentine.  In the early 1800s, it was commonly referenced along with Oil of Spike Lavender by artist’s handbook writers.   For experimenters, it is an interesting oil, with unique working qualities.  At one point, Oil of Rosemary was considered the best alternative to Oil of Spike Lavender, especially for those who had allergy concerns.  It has strong solvent properties, but is less toxic than turpentine.  It is actually stronger than Oil of Spike Lavender – only a small amount is needed.

Our Oil of Rosemary is of exceptionally high quality, 100% certified organic from Tunisia. In the photo, the Rosemary Oil we sell is being processed by the farmers using steam distillation. 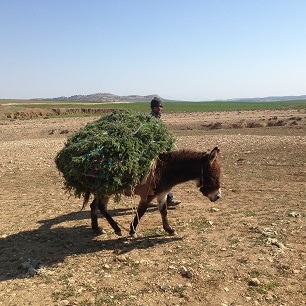 On the left, it is being harvested.

For copal and amber varnishes, copal crystals can be dissolved in Oil of Rosemary. According to Thon, T. (1826) Die Gebäudemaler und Decorateur, Ilmenau: Bernh. Friedr. Voigt, this was a technique practiced in the 19th century. Likewise, the famous porcelain manufacturers Hutschenreuter & Rosenthal in Germany use only Copaiba with Rosemary or Clove, as a painting medium.  Oil of Rosemary is generally used a drop or two at a time.

A complete GC-MS (Gas Chromatography – Mass Spectrometry) showing all the natural plant oil components of our Oil of Rosemary is included with each order.

For artists who love historic oils, Oil of Rosemary is definitely worth exploring!